Our first day took us to the UC Berkeley campus where students of Zaytuna College greeted our 13 enthusiastic trip members soaked from the characteristic early-Spring Northern California downpour. The plan for the day was to attend Friday Muslim prayer services with our hosts, after which we would participate in their Project Downtown food distribution program and then to end our trip in classic Faith-In-Action reflection.

Zaytuna College is the first and only undergraduate Muslim academic institution in America. Their 14 students study all core subjects offered at the regular university but through an Islamic lens. Additionally, the students chose to major in either Arabic or Islamic Studies. Their reasons for enrolling in the college varied. However, the prevailing consensus for their investment in the program was an appreciation for its mission statement: "Zaytuna College aims to educate and prepare morally committed professional, intellectual, and spiritual leaders, who are grounded in the Islamic scholarly tradition and conversant with the cultural currents and critical ideas shaping modern society."
Five of these students joined us for a Halal lunch at Julie's cafe three blocks from Berkeley's main campus. We then trekked over (in the rain) to Hearst gym where we sat down to a khutba, sermon, about many themes drawn from Islam and its intersection with current events, including the message of hope and faith in God that we can take from the revolutions in Libya and Egypt.
Following the prayer, we headed to the MLK students' center and set up a station to prepare lunches that we would distribute to homeless individuals standing on the sidewalks of Berkeley or gathered in People's Park. Doing Henry Ford proud, our assembly line cranked out 50 brown paper bag lunches in under 30 minutes. 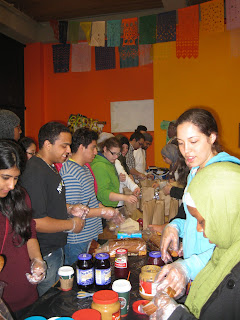 We then walked with the lunches through the city. A man on Telegraph Ave. was approaching our group holding a sign that said "Hungry" and looking longingly at each person quietly passing him. Rasheeda of Zaytuna College handed him a lunch. It was the look of surprise and then the expression of unexpected joy on the man's face that was the highlight of my day.
People's Park in the 60s was the congregation ground of student protestors. Now, it is a station for homeless people wandering through Berkeley. Guaranteed food form student service groups and shelter in the park's bathrooms, the homeless spend their day sitting around and talking with each other.
We handed out the paper bag lunches and then remained in the area speaking with the individuals at the park about their experiences, Catholicism, Islam, Bluegrass music. Zain and I had one conversation with an elderly man, Walter Monroe Jones as his state ID claimed him to be, who asked us to Google his Bluegrass band. Later, he sang for us a song about a Spanish saloon which he accompanied with his guitar.
Another conversation that I was a part of concerned an idea that is the foundation of our trip: learning about the issue of urban homeless through experience. The hope is that experiential knowledge will give us a more direct path to personalizing the issue and understanding it on a humanized basis.
Jim and his girlfriend had come to Berkeley a couple of weeks ago after spending time in Reno and Las Vegas. Jim had a good time gambling in Las Vegas which he called the "entertainment city" of America. Jim asked Alice and I what we are doing in San Francisco. We felt hesitant to say that we are here to learn about "homelessness." Is calling someone "homeless" PC? We stuck to, "we would like to learn about people at different socio-economic strata in San Francisco." Jim finished our train of thought: "Good thing you came here because now you get to see for yourselves what it's like. You won't learn this from an academic setting."
He proceeded to talk about how some people at the park were content with their lives because they were simple. This was a surprise to me. "Who wants the hustle and bustle of moving up to higher economic strata?" He also reinforced the notion that there is no uniform set of causes behind homelessness; each person has their own very uniques paths down the socio-economic ladder.
Other conversations resulted in more personal revelations. They elucidated reasons how the people had found themselves in an impoverished situation: drugs, childhood trauma resulting in mental health issues.
We then left the park and gathered in a building near Berkeley campus that is the home to Zaytuna College. Sitting around Halal dinner, we reflected on the day, homelessness, and then discussed the Islamo-phobic trend in political events. Toward the end we were joined by Imam Zaid Shakir, a co-founder of Zaytuna College, who posed to all of us this question: what is the purpose of your generation?
We spoke of the transience of a service project that distributed 50 lunches one day. How can we make a lasting impact? However, let's not focus on only the long-term process toward a solution. Moments of happiness (like a smile on "Hungry"- sign man's face) endowed our experience with meaning. Is there guilt associated with being able to remove ourselves from the situation and enjoy a dinner in a warm setting? What did Prof. Sonu Bedi say about karma, the lottery of birth, and the obligation to give back to our communities during "What Matters to Me and Why"? Does faith give us agency? What does it mean to serve in the name of "religion"?
We then discussed what "radical Islam" is. Is it fair to qualify the term Islam with adjectives like "moderate" and "extreme"? Islamo-phobia exists because of ignorance and because there are no consequences for degrading Islam in the public sphere. As a matter of fact, it's a Tea Party campaign strategy (almost). Peter King. There are many other radical groups in the US...the KKK. How do we tackle the talk about radicalization as a whole, instead of pinpointing Muslims only? How should we as an inter-faith group educate others about Islam? 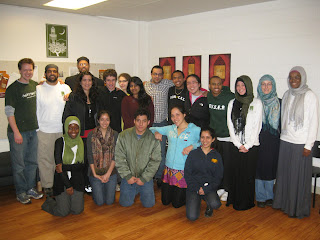 After a fantastic first day, we headed back to the Tenderloin in downtown San Francisco. There was so much hail on the ground in Berkeley. But what else could we expect? It's NorCal; not perfect-weather SoCal.
Posted by Faith in Action '11 at 6:46 PM

Richard Crocker is the Dean of the Tucker Foundation, as well as the Chaplain of Dartmouth College. He is an ordained minister in the Presbyterian Church (USA) and is a licensed pastoral psychotherapist.